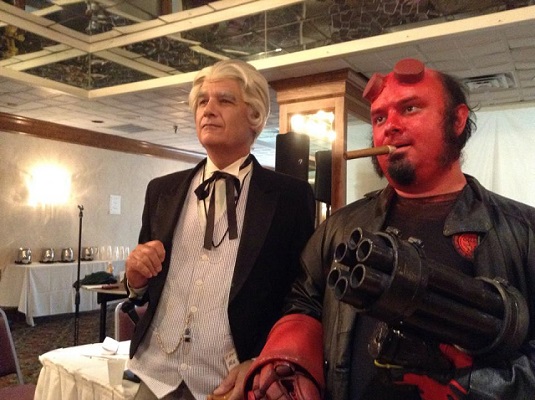 One question that comes up from time to time is about the name of our endeavor, Cosplay Convention Center. If you have explored the site, you have discovered that we do a lot more than just cosplay, we help you discover multi-genre pop culture events as well as the individuals and organizations who attend them. So why did we name the company and the site Cosplay Convention Center? Well the best answer is that everything has an origin and that is where the idea got its start.

The very first convention I attended I was not dressed up, had no idea what to expect and it was only because of a blurb on the local news that I decided to check it out. I tried in vain to get my friends to attend with me so alone I went and discovered my very first convention. I had no idea what to expect and what I found was an amazingly welcoming community of people who liked all the same things I did! I spent most of my time walking around and talking to people and getting some board games played. I shared with people my Halloween costume of Hellboy and was told that the following year I had to dress up for the convention. Needless to say, I was hooked. The convention I got my start at is Portcon which takes place in Maine.

A few years later I convinced my father to attend, it only took a year of me bugging him but he came as William Hartnell, the first Doctor Who, the original you might say. As the Doctor often does, he somewhat stole the show and I believe that year his cosplay was more popular then my Hellboy. After the convention, he wanted to go to more and asked where to find them. Cosplay Convention Center wasn’t even an idea in my head at this point, but it wasn’t far off. As we began exploring the web for conventions, and talking to my friends from conventions, a common theme seemed to spring up, it was a simple comment that it should be easier to discover conventions. Like a song that you can’t get out of your head, it just kept kicking around so after one particularly lousy day at work, I bought the web domain www.CosplayConventionCenter.com. The name I chose because I have had such great experiences with cosplayers and had so much fun cosplaying myself.

One Site to Find Them All, a tongue and cheek nod to Tolkien, has always been the motto. All refers to conventions, cosplayers, cosplay groups, artists, writers, photographers, podcasts, celebrities, creators, merchants, vendors, and entertainers. Our eBooth service makes it possible to discover them and directly links to all of the conventions in our database. The name may say Cosplay, our site’s origin is there, but we offer you a convention discovery experience like no other site online. Welcome to Cosplay Convention Center – One Site To Find Them All.