Two Dixie Cups and a Fist of Foam 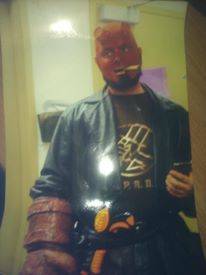 One of the most common things I hear from people and see in social media posts online is that individuals do not feel they have the skill set required to be a cosplayer. Now, in no way am I a master level Cosplayer, and the truth is I do not aspire to be one. In the same moment however, I have the utmost respect for those people who create and compete on that level. My first cosplay was actually just a Halloween costume; I wasn’t even aware of Cosplay or the community that was waiting to be discovered. You do not have to have a great amount of skill to be a cosplayer and you shouldn’t let that hold you back. Cosplays also don’t have to be perfect the first time out of the gate. The amazing pictures you see getting showcased online are many times the third, 4th, or 5th incarnation of the costume. The more you do it, the more you create, the more you learn. I won’t say fail because I do not think any part of a cosplay is a fail, even if you personally hate how your creation turned out, I bet you have learned something. Cosplay in its purest form is done because it is fun. The very first time I did my Hellboy costume I had two Dixie cups attached with latex to my forehead, a nerf gun (that was all the wrong colors), and a black trench coat a friend gave to me. Oh, I also had a store bought replica prop of his giant hand, the fist of doom. Yes, I said it, I had a store bought prop, and there is nothing wrong with that, it worked great. I took a full can of red hair spray from the Halloween shop and doused my head in it. An important note, there are much better ways to paint your head I have discovered. I have learned a lot in the past 6 years about my own cosplay as well as the cosplay community. In fact, the journey has been one of the most interesting ones I have ever embarked upon as I look back on it thus far. When I attended my first convention, Portcon, I was much like Jon Snow, I knew nothing. I did not even bring my Hellboy to Portcon the very first time I went because I did not think it was good enough. I was in that exact same boat that I see so many people about now. At that first convention, I ended up talking with a very nice girl who had an amazing Poison Ivy cosplay. I showed her the pic of me as Hellboy and I received a friendly inquiry combined with a lecture about why I was not in cosplay. When Poison Ivy playfully threatens you, it becomes pretty easy to decide to go to a convention in Cosplay the following year, however I decided to make some much needed improvements.

In two days, I will be attending Portcon 2016, it will be my fourth time bringing Hellboy to the convention and my first time bringing my company. Normally I spend all of Portcon playing Heroclix and Cosplaying, it will be a change to have a table. I will also only be in costume on Saturday of the convention, a change from my usual two days but to be honest it’s a really hot cosplay and one day will be plenty. I’ve brought Cosplay Convention Center to Bangor Comic and Toy convention and I will be bringing it to Boston Comic Con in August. Tabling is a lot of fun and I enjoy showing everyone that there is a better way to discover conventions, merchants, and cosplay groups. One Site to Find Them All, it means everyone, rookies, experts and everyone in between. I never imagined five years ago that something as simple as two Dixie cups and a fist of foam would result in me writing a blog for my website encouraging everyone who has thought about cosplaying to do it. Find a convention, start small, believe in yourself, have fun and you never know where you will end up. No matter what skill level you are, look for Cosplay Convention Center, we will always love what you have created and encourage you to keep going, remember we are all in this together, let’s enjoy ourselves!