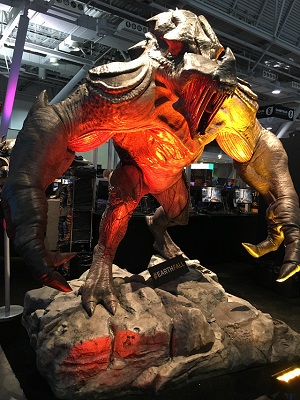 I applied for and was fortunate enough to receive a press pass to PAX East 2017. Last year I attended PAX for the first time on a whim and to be honest, I wasn't prepared for what I walked into. The sheer size of the convention cannot be appreciated until one has descended to the con floor, and realized every inch of it is being utilized. Once you have grasped the magnitude of the convention it is time to explore and there is so much to see. Two days last year was not enough and I am grateful to have an extra day this year.

Monsters and Elevators, I chose as the name of this blog for a few reasons. One being that there are a multitude of elevators to shuttle you between the multiple floors PAX occupies, and there are plenty of escalators as well. Monsters because of the amazing cosplays you see walking around PAX East. Cosplay is not a focus of the convention, there is no giant cosplay contest but the craft is welcomed and appreciated. If imitation is the highest form a flattery, imagine being a game creator and someone comes in dressed up as your creation. I bring special attention to it with PAX because of what they do for the Indie Game community, whether it is tabletop or video, they provide a giant stage for the up and coming games. I love the giants, but I must admit, there is nothing better than talking to the indie developers. The passion I hear in their voice as they share their creation is the same passion I feel when I talk about Cosplay Convention Center. Quick side note, I totally pulled of an elevator pitch tonight on the way back to my room, something I was very happy to accomplish.

In addition to being able to attend PAX, I received multiple invitations to after parties and tonight I chose to attend one hosted by Mass Digi called Made in MA. If you have ever attended a business after hours event, this was the feel it had, and it also showcased other local indie gaming talent. Some of those individuals were attending PAX while others took the opportunity to enjoy PAX but show case their product in a smaller more intimate setting. People were mingling, trading business cards and enjoying the creations that were there to play and learn about. One of the last tables I stopped at was a card game called Monsters in the Elevator. I’m going to date myself a bit but I honestly thought of a song from my childhood called Alligator in the Elevator, by Rick Charrette, but I digress. The wonderful creator of the game is named Jason Wiser, his game one of the top 5 finalists of Hasbro’s Gaming Lab 2016. Monsters work in an office with only one elevator. Players, cooperatively work together to get the monsters to their designated floors. Like all elevators though, there is only so much weight it can handle, and some of those monsters, especially Mongo, weigh quite a bit. The target audience is 7-11-year old’s but after a full day of running around PAX it was the perfect way to wrap up my night. I did crash the elevator, but don’t worry, no monsters were hurt in the process. As Jason explains, the monsters are very fluffy and bounce when the elevator crashes. Offering up a unique way of showing kids how to estimate and work together feels like a refreshing thought involving game that makes you think and have fun doing so.

Another monster showed up for PAX and she is known as mother nature. I walked out of the event into sideways snow coming in off the water and a wind whipping it around with force. Thankfully it does not appear to be accumulating and most people seem to be laughing at it more than anything else. Day two of PAX is coming up fast, and tomorrow night at 9PM in the Bobcat Theater, Controller Throwers Live happens on their largest stage to date. The prize pool is sweet, I’ve seen it. Never heard of Controller Throwers? Remember all those games that drove you nuts? I bet a controller or two back in the day went sailing across the room. Relive your frustrations but do it in a safe, welcoming, cathartic group setting, where you compete against those who understand your pain. Your efforts will be rewarded with Pokki, bragging rights, & other wonderful things.

Day one officially in the books, day two coming up fast, feels good to be back at a con!

#EARTHFALL (for the awesome pic!)